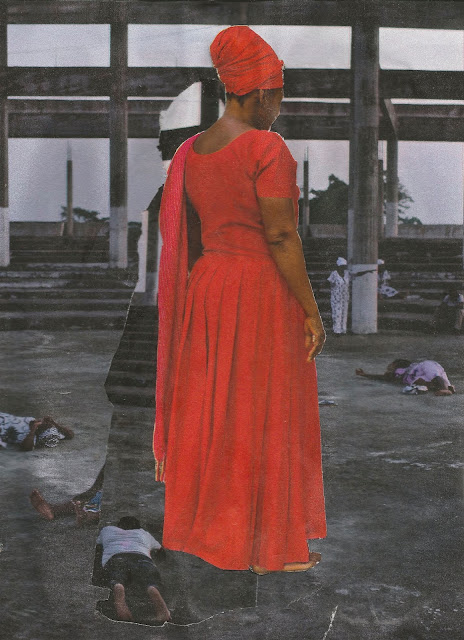 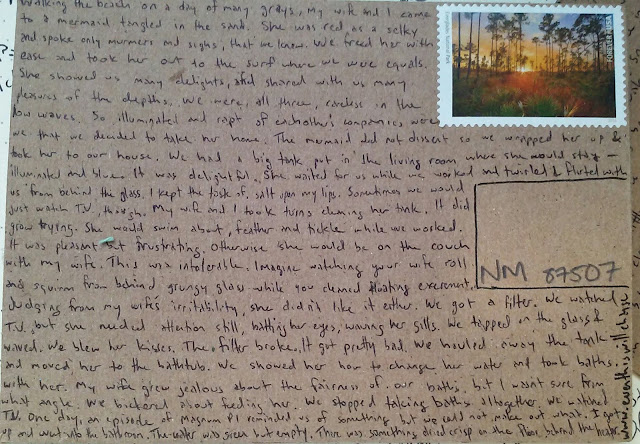 Walking the beach on a day of many grays, my wife and I came to a mermaid tangled in the sand. She was red as a selkie and spoke only in murmurs and sighs, that we knew. We freed her with ease and took her out to the surf where we were equals. She showed us many new and strange pleasures from the depths. We were, all three, careless in the low waves.
So illuminated and rapt of each others' company were we, that we decided to take her home. The mermaid did not dissent, so we wrapped her up and took her to our house.We had a large tank put in the living room where she would stay -- illuminated and blue. It was delightful. She waited for us while we worked and twirled and flirted with us from behind the glass. I kept the taste of salt upon my lips. Sometimes we would just watch TV though. My wife and I took turns cleaning the tank. It did grow trying. She would swim about, feather and tickle, while we worked. It was pleasant but frustrating. Otherwise, she would sit on the couch with my wife. This was intolerable. Imagine watching your partner roll and squirm from behind grungy glass while you cleaned floating excrement. Judging from my wife's irritability, she felt the same. We got a filter. We watched TV, but she needed attention still, batting her eyes, waving her gills. We tapped on the glass and waved. We blew her kisses. The filter broke. It got pretty bad. We hauled away the tank and moved her to the bathtub. We showed her how to run the water. We took baths with her. My wife grew jealous about the fairness of the baths, but I wasn't sure from what angle. We bickered about feeding her. We stopped taking baths altogether. We watched TV. One day a episode of Magnum P.I. reminded us of something, but we could not make out what. I got p from the couch and went into the bathroom. The bathtub was full. The water was green but empty. There was something dried crisp on the floor behind the heater.
Posted by ncdarquea at 6:10 PM