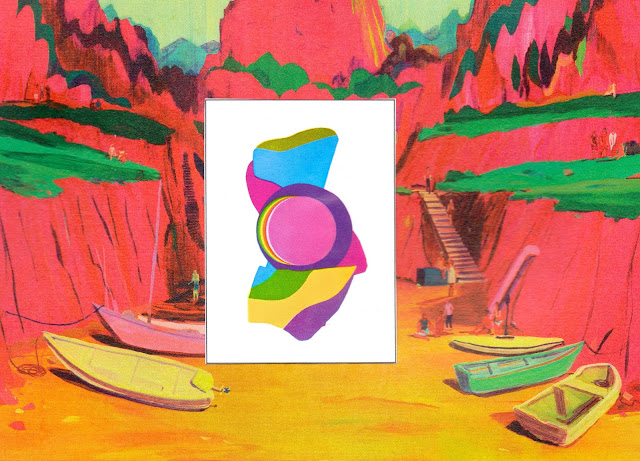 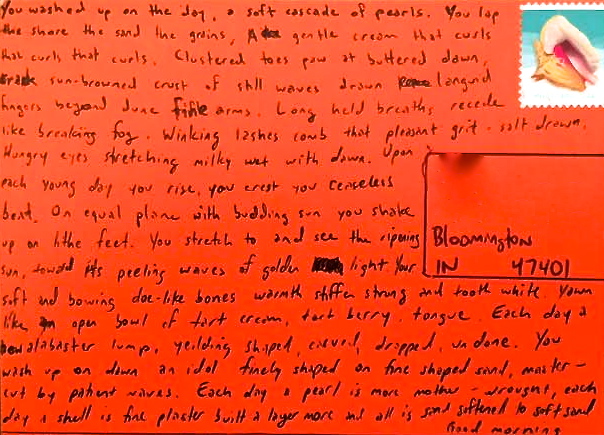 
Upon each young day we rise
we crest, we ceaseless beat
On equal play with budding sun
we shake up on lithe feet

Posted by ncdarquea at 2:34 PM No comments: 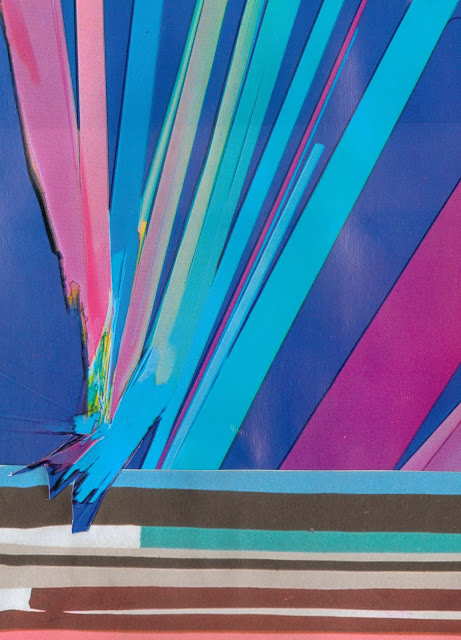 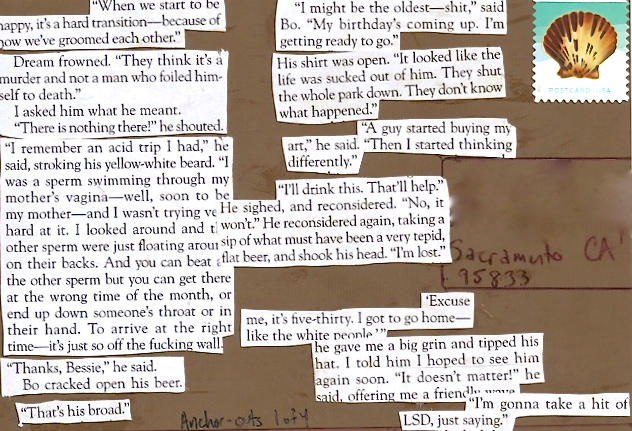 'When we start to be happy, its a hard transition
-- because we've groomed each other.'
Dream frowned. 'They think its a murder
and not a man who foiled himself to death.'
I asked him what he meant.
'There is nothing here!' he shouted.

'I remember an acid trip I had,' he said,
stroking his yellow-white beard.'I was a sperm
swimming through my mother's vagina --
well, soon to be my mother --
and I wasn't trying very hard at it.
I looked around and the other sperm
were just floating around on their backs.
And you can beat the other sperm,
but you can get there at the wrong time of the month,
or end up down someone's throat or in their hand.
To arrive at the right time --
it's just so fucking off the wall.

Thanks, Bessie,' he said,
Bo cracked his beard.
'That's his broad.'

'I might be the oldest --shit,' said Bo.
'My birthday's coming up.
I'm getting ready to go.'
His shirt was open. 'It looked
like the life was sucked out of him.
They shut the whole park down.
They don't know what happened.'

'A guy started buying my art,'
he said, 'Then I stared thinking differently.
I'll drink this. That'll help.'
He sighed and reconsidered,
'No it won't.' He reconsidered again,
taking what must have been a very tepid, flat beer,
and shook his head, 'I'm lost.'

'Excuse me, its five-thirty.
I got to go home -- like the white people.'
He gave me a big grin and tipped his hat.
I told him I hoped to see him again soon.
'It doesn't matter!' he said,
offering me a friendly wave.
'I'm gonna take a hit of LSD,
just saying.'
Posted by ncdarquea at 1:10 PM No comments: 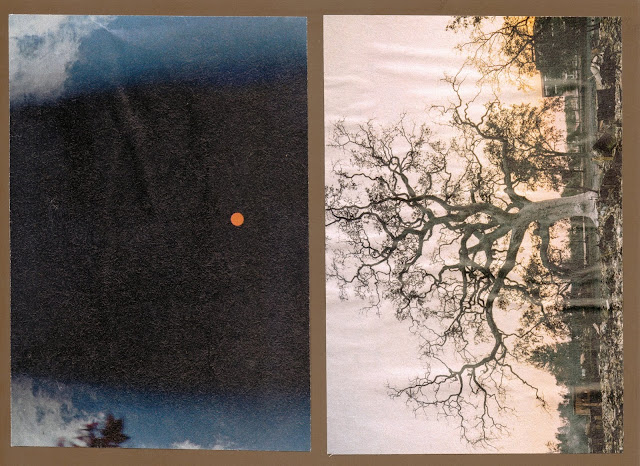 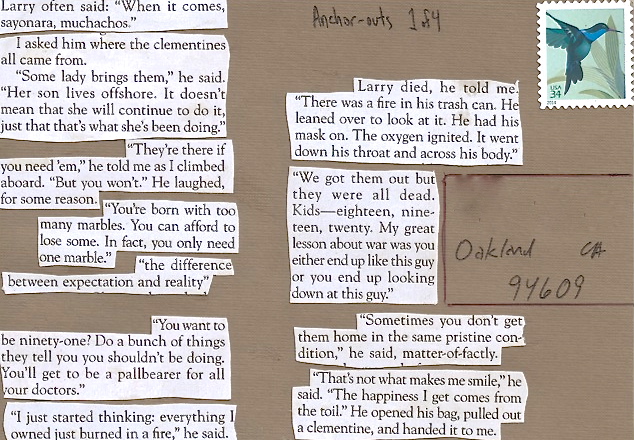 I asked him where
the clementines all came from.
'Some lady brings them,' he said
'Her son lives offshore. It doesn't
mean that she will continue to do it,
just that that's what she's been doing.'

'They're there if you need 'em,' he
told me as I climbed aboard.
'But you won't.' He laughed
for some reason. 'You're born
with too many marbles. You can
afford to lose some. In fact,
you only need one marble:
the difference between
expectation and reality.'

'You want to be ninety-one?
Do a bunch of things they tell you
you shouldn't be doing. You'll get
to be a pallbearer for all your doctors.'

'I just started thinking: everything
I owned burned in a fire.' he said.
'Larry died,' he told me. 'There
was a fire in his trash can. He
leaned over to look at it. He had
his mask on. The oxygen ignited.
It went down his throat, across his body.'

'We got them out, but they were all dead.
Kids -- eighteen, nineteen, twenty. My
great lesson about war was you
either end up looking like this guy
or you end up looking down at this guy.'

'Sometimes you don't get them home
in the same pristine condition,'
he said matter-of-factly. 'That's not
what makes me smile,' he said.
'The happiness I get come from the toil.'

He opened his bag, pulled out
a clementine, and handed it to me.
Posted by ncdarquea at 3:59 PM No comments: 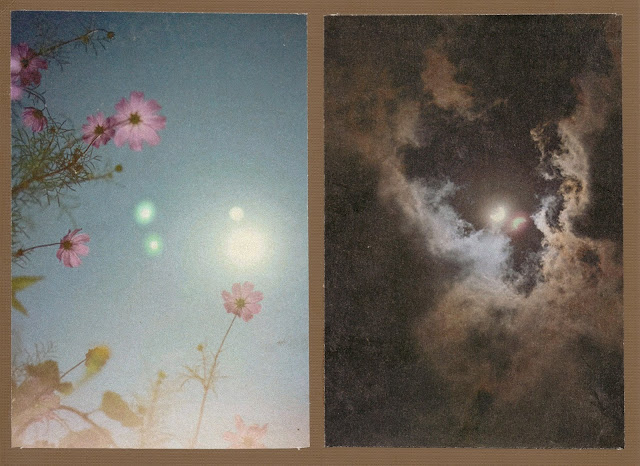 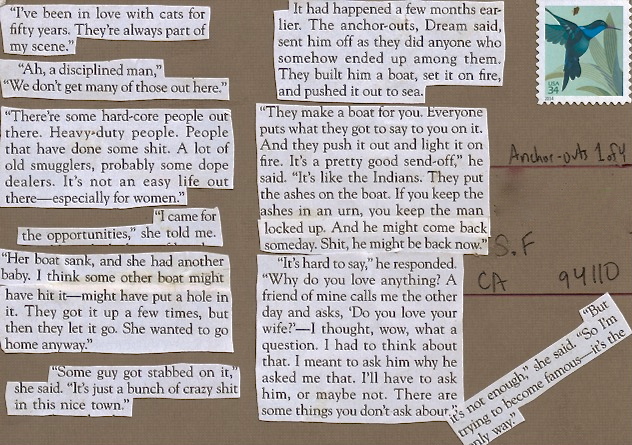 'Ah, a disciplined man,
we don't get many of those out here.'

'They're some hardcore people out there.
Heavy duty people. People
that have done some shit. A lot
of old smugglers, probably
some dope dealers. Its not
an easy life out there
--especially for women.'

'I came for the opportunities,'
she told me

'Her boat sank and she had another baby
I think some other boat might have hit it
-- might have put a hole in it.
They got it up a few times but
then they had to let it go. She wanted
to go home anyway.'

'Some guy got stabbed on it,' she said,
'its just a bunch of crazy shit
in this nice town.'

'It had happened a few months earlier.
The anchor-outs,' Dream said,
'sent him out as they did anyone
who ended up among them.
They built him a boat,
set it on fire, and
pushed it out to sea.'

'They make a boat for you.
Everyone puts what they got to say to you on it.
And they push it out and light it on fire.
Its a pretty good send off,' he said.
'Its like the Indians. They put
the ashes on the boat. If you keep
the ashes in an urn, you keep
the man locked up, and
he might come back someday
Shit, he might be back now.'

'Its hard to say,' he responded,
'Why do you love anything?
A friend of mine called the other day
and asks --"Do you love your wife?"
-- I thought, wow what a question.
I had to think about that. I meant
to ask him why he asked me that
I'll have to ask him, or maybe not.
There are some things you don't ask about.'

Posted by ncdarquea at 3:59 PM No comments: 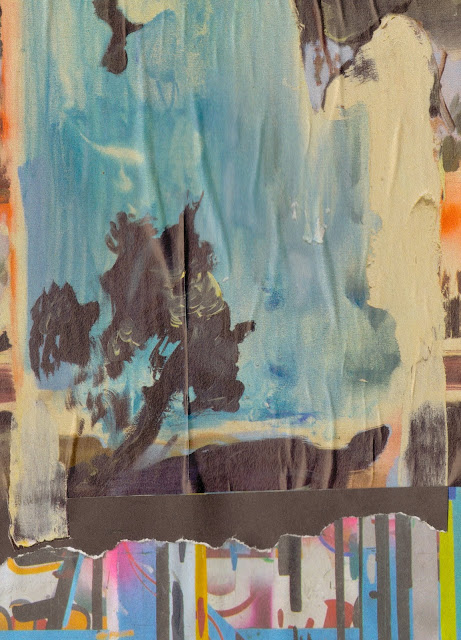 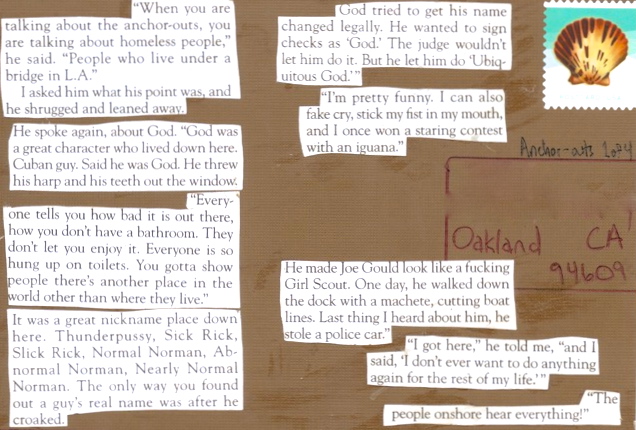 He spoke again about God:
'God was a great character lived down here.
Cuban guy. Said he was God.
He threw his harp and teeth out the window.'

'Every one tells you how bad it is out there
how you don't have a bathroom.
They don't let you enjoy it.
Everyone is so hung up on toilets.
You gotta show people there's another place
in the world other than where they live.'

'It was a great nickname place down here:
Thunderpussy, Sick Rick, Slick Rick,
Normal Norman, Abnormal Norman,
Nearly Normal Norman. The only way
you found out a guys real name
was after he croaked.'

'God tried to get his name changed legally.
He wanted to sign checks as 'God'
the judge wouldn't let him do it
But he let him do 'Ubiquitous God'.'

Its pretty funny. I can also
fake cry, stick my fist in my mouth,
and I once won a staring contest
with an iguana.

'He made Joe Gould
look like a fucking Girl Scout.
One day, he walked down the dock
with a machete, cutting boat lines.
Last thing I heard about him
he stole a police car.'

'I got here,' he said, 'and I said,
I don't want to do anything again
for the rest of my life.
The people onshore hear everything.'

Posted by ncdarquea at 3:53 PM No comments: