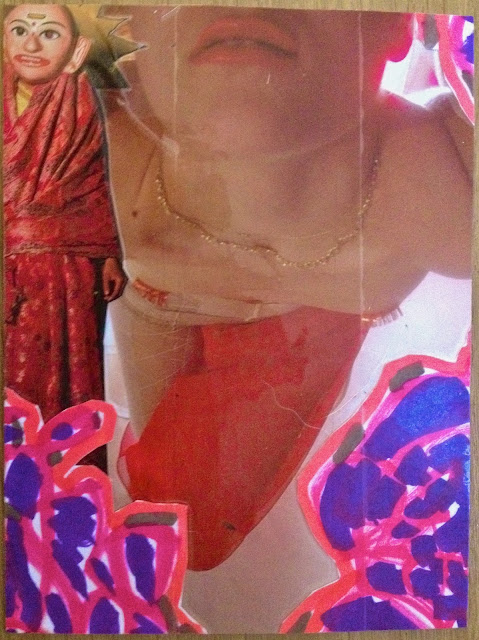 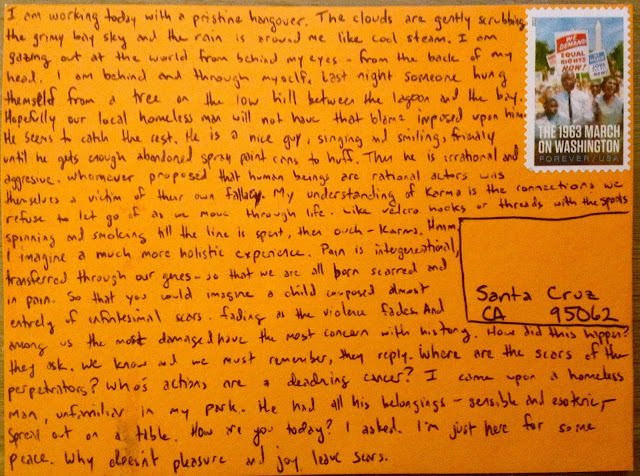 I am working today with a pristine hangover. The clouds are gently scrubbing the grimy bay sky and the rain is around me like cool steam. I am gazing out at the world from behind my eyes, from the back of my head. I am behind and through myself. Last night, someone hanged themself from a tree on the low hill between the lagoon and the bay. Hopefully our local homeless man will not have the blame for that imposed upon him. He seems to catch the rest. He is a nice guy, singing and smiling, friendly until he gets enough spray paint cans to huff. then he is irrational and aggressive. Whoever proposed that human beings are rational actors was a victim of their own fallacy.

My understanding of karma is the connections we refuse to let go of as we move through life. Like velcro hooks, or threads with the spools spinning and smoking till the line is spent, then -- ouch, Karma.
Hmm. Imagine a much more holistic experience: pain is intergenerational, transferred through our genes, so that we are born scarred and in pain. So that you imagine a child composed almost entirely of infinitesimal scars, fading as the violence fades. Among us, the most damaged would have the most concern with history.
How did this happen? they ask.
We know, and we must remember, they reply.
Where are the scars of the perpetrators, who's actions are a deadening cancer?

I came upon a homeless man, unfamiliar in my park.
He had all his belongings, sensible and esoteric, spread out carefully on a table.
How are you today? I asked.
I'm just here for some peace.

Why doesn't pleasure and joy leave scars?
Posted by ncdarquea at 6:35 PM No comments: 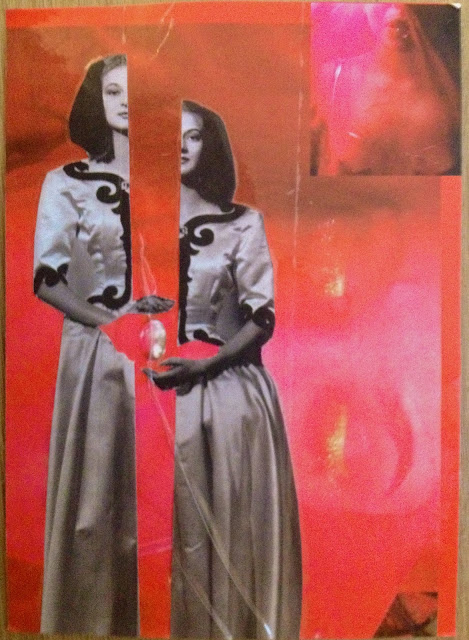 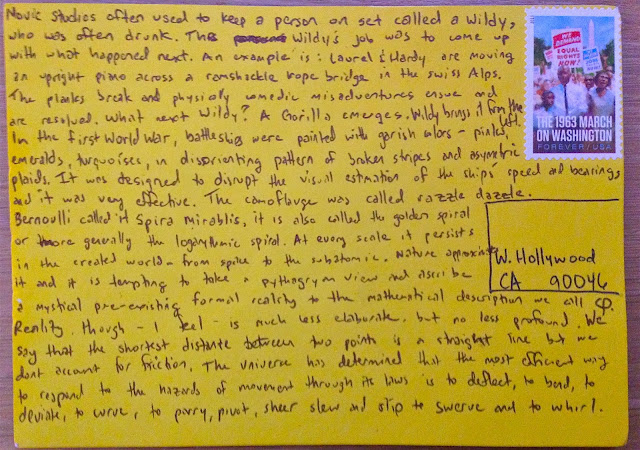 Movie studios often used to keep a person on set called a Wildy, who was often drunk. The Wildy's job was to come up with what happened next. An example is: Laurel and Hardy are moving an upright piano across a ramshackle rope bridge is the Swiss Alps. The planks break and physically comedic misadventures ensue. What next Wildy? A gorilla emerges. Wildy brings it from the left.

In the first World War, battleships were painted with garish colors -- pinks, emeralds, turquoises -- in disorienting patterns of broken stripes and asymmetric plaids. It was designed to disrupt the visual estimation of the ship's speed and bearing, and it was very effective. The camouflage was called razzle dazzle.

Bernoulli called it Spira Mirablis. It is also called the golden spiral, or more generally the logarithmic spiral. At every scale it persists in the created world. From space to the subatomic, nature approximates it. It is tempting to take a pythagorean view and ascribe a mystical pre-existing formal reality to the mathematical description we call Φ. Reality, though is much less elaborate, I feel, but no less profound. We say that the shortest distance between two points is a straight line, but we don't account for friction.
The universe has determined that the most efficient way to respond to the hazards of movement through its own laws is to deflect, to bend, to deviate, to curve, to parry, sheer, slew and slip, to swerve and to whirl.
Posted by ncdarquea at 10:40 AM No comments: 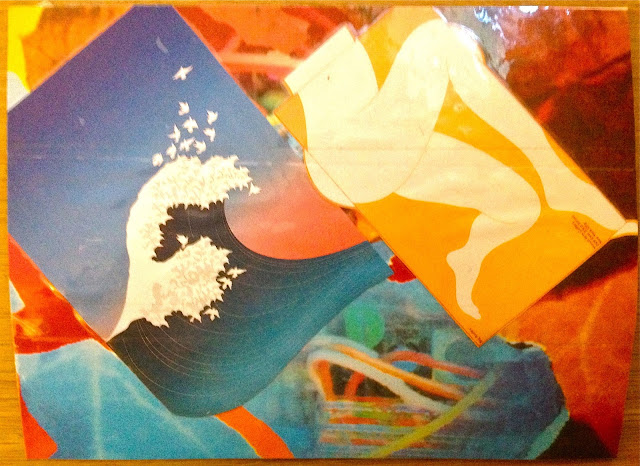 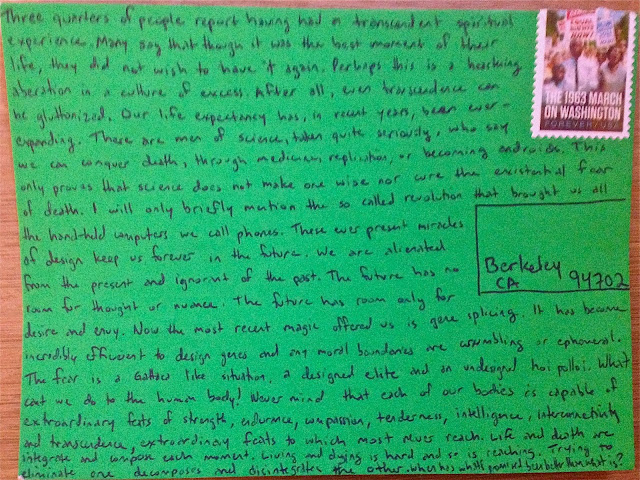 Three quarters of people report having had a transcendental experience. Many say that, though it was the best moment of their lives, they did not wish to have it again. Perhaps this is a heartening aberration in a culture of excess. After all, even transcendence can be gluttonized. Our life expectancy has, in recent years, been ever expanding. There are men of science, taken quite seriously, why say we can conquer death, through medicine, replication, or by becoming androids. This only proves that science does not make one wise nor cure the existential fear of death. I will only briefly mention the so called revolution that brought us the hand held computers we call phones. These ever-present miracles of design keep us forever in the future. We are alienated from the present and ignore the past. The future has no room for thought or nuance. The future has only room for desire and envy. Now the most recent magic offered us is gene splicing. It has become incredibly efficient to design genes and moral boundaries are crumbling or ephemeral. The fear is a Gattica-like situation, a designed elite and an undesigned hoi polloi. What can't we do with the human body! never mind that each of our bodies is capable of extraordinary feats of strength, endurance, compassion, tenderness, intelligence, interconnectivity and transcendence -- extraordinary feats to which most never reach.
Life and death are integrate and compose each moment. Living and dying is hard and so is reaching. Trying to eliminate one decomposes and disintegrates the other.
When has what's promised been better than what is?
Posted by ncdarquea at 11:10 PM No comments: