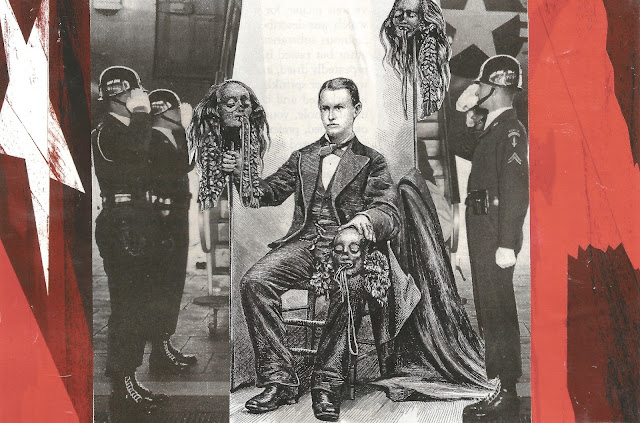 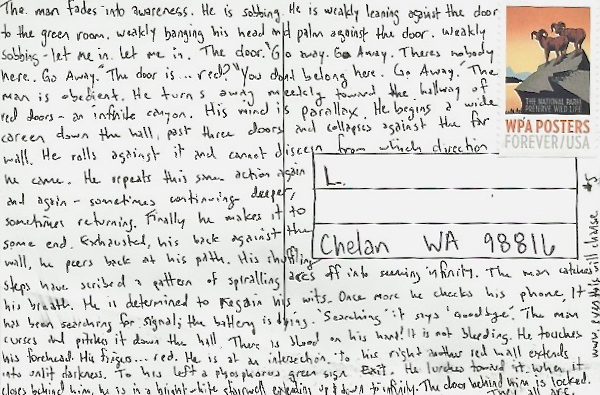 The man fades into awareness. He is sobbing. He is weakly leaning against the door to the green room, weakly banging his head and palm against the door. Weakly sobbing -- let me in, let me in. The door 'Go away. Go away. There's nobody here. Go away.' The door is...red? 'You don't belong here. Go away!' The man is obedient. He turns away meekly toward the hallway of red doors -- an infinite canyon. His mind is parallax. He begins a wild careen down the hall, past three doors, and collapses against the far wall. He rolls against it and cannot discern from which direction he came. He repeats this same action again and again -- sometimes continuing deeper down the hall, sometimes returning. Finally, he makes it to some end. Exhausted, his back against the wall, he peers at his path. His shuffling steps have scribed into the thick carpet a pattern of spiraling arcs off into seeming infinity. The man catches his breath. He is determined to regain his wits. Once more he checks his phone. It has been busy looking for signal. 'Searching' it says 'Goodbye'. The man curses and pitches it down the hall. There is blood on his hand! It is not bleeding. He touches his forehead. His fingers...red. He is at an intersection. To his right another hall extends into unlit darkness. To his left, a phosphorous green sign. Exit. He lurches toward it. When the door closes behind him he is in a bright white stairwell, extending up and down to end of sight. The door behind him is locked. They all are.
Posted by ncdarquea at 5:33 PM