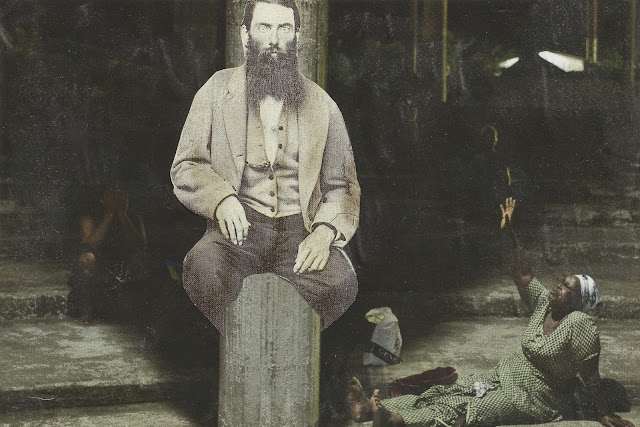 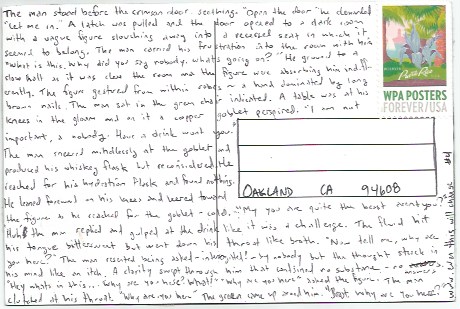 The man stood before the crimson door seething. "Open the door, " he demanded, "Let me in!" A latch was pulled and the door opened to a dark room. A vague figure slouched away into a recessed seat in which it seemed to belong. The man carried his frustration into the room with him. "What is this -- why did you say nobody was in here? Whats going on?" He ground to a slow halt as it became clear the the room and the figure were absorbing him with indifference. The figure gestured with a hand from within robes, a hand dominated by long brown nails. The man sat in the chair so indicated. A table was at his knees in the gloom, and on it a copper goblet perspired. "I'm not important, a nobody. Have a drink wont you." The man sneered mindlessly at the goblet and produced his whiskey flask, but reconsidered. He reached for his hydration flask and found nothing. He leaned forward on is knees and leered toward the figure as he reached for the goblet -- cold. "My, you are quite the beast aren't you." "Huh." the man gulped at the drink like it was a challenge. The fluid hit his tongue bittersweet, but went down his throat like a salty broth. "Now tell me, why are you here?" The man resented being asked, interrogated, by nobody, but the thought stuck in his mind like an itch. A clarity swept through him that contained no substance, no answers. "Hey, whats in this...why are you here? What!" "Why are you here," asked the figure. The man clutched at his throat. "Why are you here?" The green came up around him. "Beast. Why are you here?"
Posted by ncdarquea at 8:24 PM