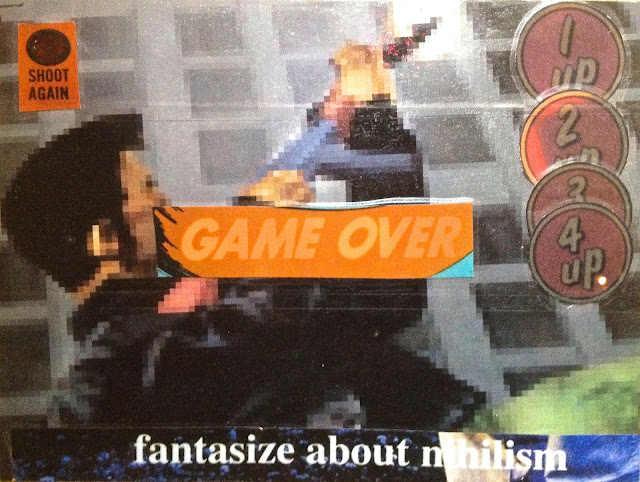 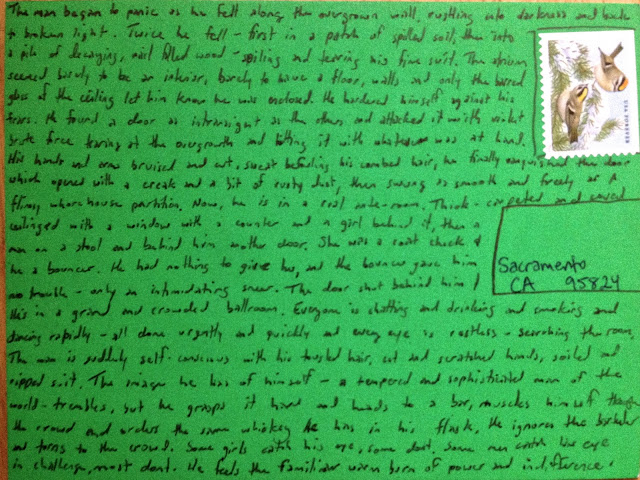 The man begins to panic as he feels along the overgrown wall, rustles into darkness and back into broken light. Twice he falls, first in a patch of spilled soil, then into a pile of decaying and nail-filled wood, soiling and tearing his fine suit. The atrium seems barely to be an interior, barely to have a floor or walls, and only the barred glass of the ceiling lets him know he is enclosed. He again hardens himself against his fears. He finds a door as intransigent as the others and attacks it with violent brute force, tearing at the undergrowth and hitting the door with whatever is at hand. His hands and arms are bruised and cut, sweat befouls his combed hair, but he finally vanquished the door which opens with a creak and a bit of rusty dust, then swings as smooth and free as a flimsy whorehouse partition. Now he is in the real anteroom, thick carpeted and cove ceilinged, with a window in one wall that has a pretty girl behind it, then a man on a stool and behind him, another door. She is a coat check girl and he a bouncer. He has nothing to give her and the bouncer gives him no trouble, only an fake intimidating sneer. The door shuts behind him and he is in a grand and crowded ballroom. Everyone is chattering and drinking and smoking and dancing rapidly. All urgent and quick,  and every eye is restless and searching. The man is suddenly self-conscious of his tousled hair, scratched hands and torn suit. The image he has of himself -- a tempered and sophisticated man of the world -- trembles, but he grasps it hard and heads to the bar, muscles himself through the crowd and orders the same whiskey that he has in his flask. He ignores the bartender and turns to the crowd. Some girls try to catch his eye. Some don't. Some men catch his eye in challenge. Most don't. He feels the familiar warm burn of power and influence.
Posted by ncdarquea at 11:12 PM