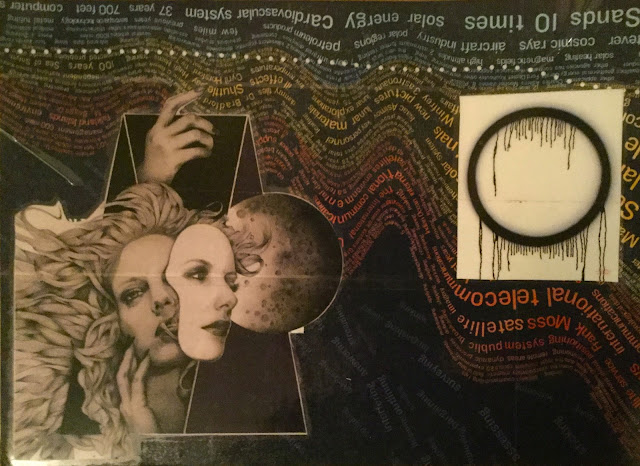 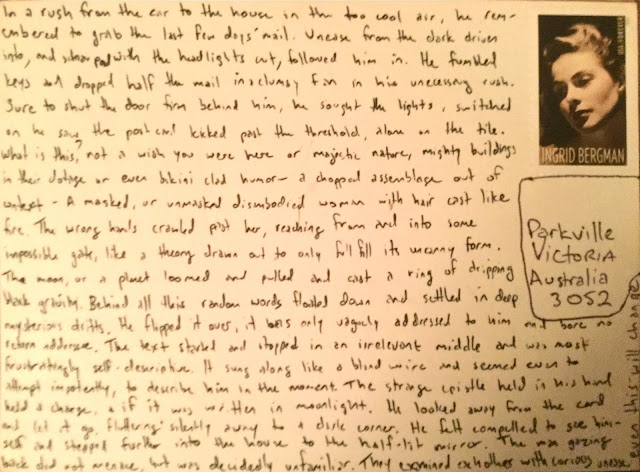 In a rush from the car to the house in the too cool air, he remembered to grab the last few days' mail. Unease from the dark driven into, and sharpened with the headlights cut, followed him in. He fumbled keys and dropped the mail in a clumsy fan in his unnecessary rush. Sure to shut the door firmly behind him, he sought the lights. Switched on, he saw the postcard kicked past the threshold alone on the cool tile. What is this? Not a wish you were here, or majestic nature, nor mighty buildings in their dotage. Not even bikini-clad humor, but a chopped assemblage out of context: a masked, or unmasked and disembodied woman with hair cast like fire, the wrong hands crawled past her, reaching from and into some impossible gate, like a theory drawn out only to fulfill its uncanny form. The moon, or a planet, loomed and pulled and cast a ring of dripping black gravity. Behind all this random words floated down and settled in deep mysterious drifts. He flipped it over. It was only vaguely addressed to him and bore no return address. The text started and stopped in an irrelevant middle and was frustratingly self-descriptive. It sung along like a blind wire, and seemed even to attempt impotently to describe him in the moment. The strange epistle held in his hand had a charge as if written under moonlight. He looked away from the card and let it fall, fluttering silently away to a dark corner. He felt compelled to see himself and stepped further into the house to a half-lit mirror. The man gazing back did not menace, but was decidedly unfamiliar. They examined each other with curious unease.
Posted by ncdarquea at 8:17 PM