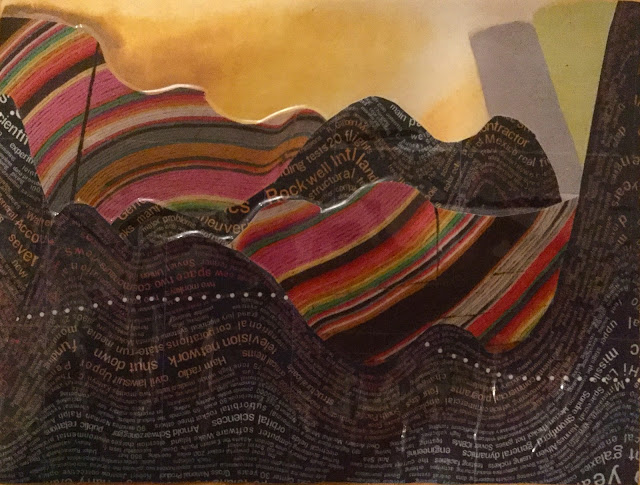 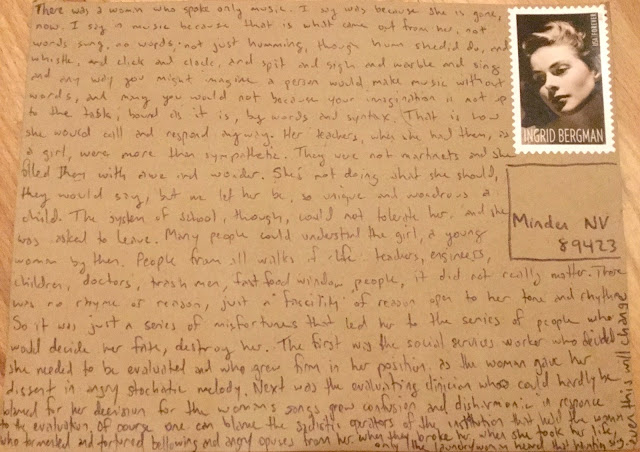 There was a woman who spoke only music. I say 'was' because she is gone now. I say 'music' because that is what came out of her, not words sung, no words. Not just humming, though hum she did, and whistle and click and clack and spit and sigh and warble and sing in any way you might imagine a person would make music without words, and many you would not because your imagination is not up to the task, bound as it is by words and syntax. That is how she would communicate, call and respond anyway. Her teachers, when she had them as a girl, were more than sympathetic. They were not martinets and she filled them with awe and wonder. She's not doing what she should, they would say, but we let her be, so unique and wondrous a child. The system of school, however, could not tolerate her and she was made to leave. Many people could understand the girl, a young woman by then. People from all walks of life: teachers, children, engineers, trash-men, doctors, fast-food-window workers, it did not really matter. Some did, some did not. There was no rhyme or reason, just a facility of reason open to her tones and rhythms. So it was perhaps just a series of misfortunes that led her through the people who would decide her fate, destroy her. The first was the social services worker who decided she needed to be evaluated, and who grew more resolute in her decision as the singing woman voiced her dissent in angry stochastic melody. Next was the evaluating clinician who could hardly be blamed for her evaluation, for her subject's songs grew confused and dis-harmonic in response to the dizzying evaluation questions. Of course, one could blame the sadistic operators of the institution that held the woman, who's neglect and torment tortured angry bellowing opuses out of her, filling the halls and rooms with ominous climbing and descending adagios. When they broke the woman, when she took her life, only the ignorant laundrywoman heard the haunting song.
Posted by ncdarquea at 12:03 PM