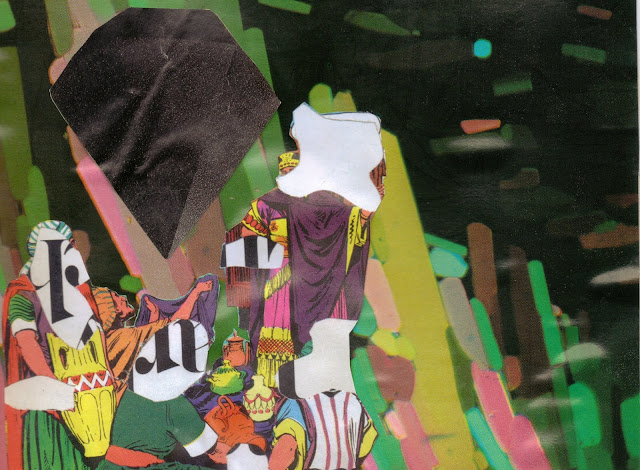 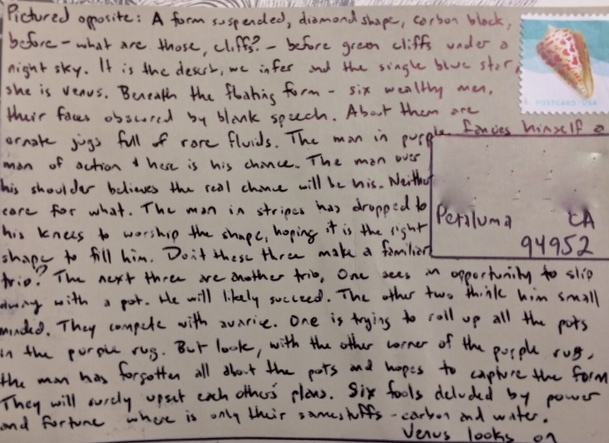 Pictured opposite: A form suspended, diamond shape, carbon black, before -- what are those, cliffs? -- before green cliffs under a night sky. It is the desert, we infer, and the single blue star -- she is Venus. Beneath the floating form: six wealthy men, their faces obscured by blank speech. About them are ornate jugs full of rare fluid. The man in purple fancies himself a leader, a man of action and here is his chance. The man over his shoulder believes the real chance will be his. Neither care for what. The man in stripes has dropped to his knees to worship the shape, hoping it is the right shape to fill him. Don't these three make a familiar trio? The next three are another known trio. One sees an opportunity to slip away with a pot. He will likely succeed. The other two think him small minded. They compete in avarice. One is trying to roll up all the pots in the purple rug. But look, with the opposite corner of the rug, that man has forgotten all about the pots. He hopes to capture the form. They will surely upset each others plans. Six fools deluded by power and fortune, where is only their same-stuffs, carbon and water. Venus looks on
Posted by ncdarquea at 8:17 PM