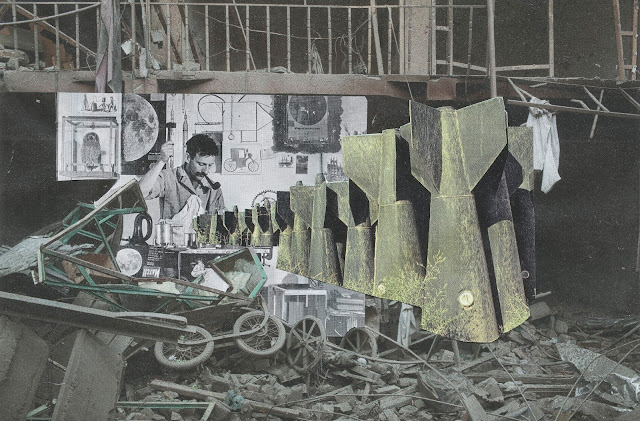 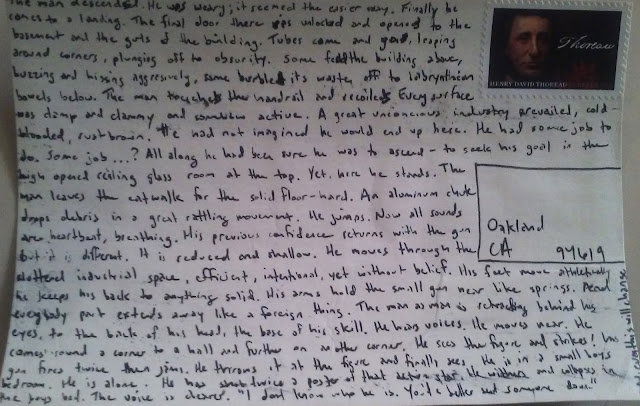 The man descends. He is weary. It seems easier this way. Finally, he comes to a landing.
The final door there is unlocked and opens to basement and the guts of the building. Tubes and pipes come and go, leaping around corners, plunging off to obscurity. Some feed the building above, buzzing and hissing aggressively. Some burble its waste off to labyrinthine bowels below. The man touches the hand rail and recoils. Every surface is clammy and damp and somehow active. A great unconscious industry prevails, cold, rust-brown. He had not imagined he wold end up here. He had some job to do. Some job..? All along he had been sure he was to ascend -- to seek some goal in the high opened ceiling clear glass room at the top. Yet here he stands. The man leaves the catwalk for the solid floor. Hard. An aluminum chute drops debris in a rattling of noise and movement. He jumps. Now all sounds are heartbeat, breathing. His previous confidence returns with his gun in his hand, but it is different. It is reduced and shallow. He moves through the cluttered industrial space, efficient, intentional, yet without belief. His feet move athletically. He keeps his back to anything solid. His arms hold the small gun near, like springs. But every body part extends away like foreign things. The man as man is retracting behind his eyes, to the back of his head, the base of his skull. He hears voices and moves near. He comes round a corner to a hall and further on another corner. He sees the figure and strikes. His gun fires twice and jams. He throws it at the figure and finally sees. He is in a small boy's bedroom. He is alone. He has shot twice a poster of that popular action star. He withers and collapses in the boy's bed. The voice is clear now -- a woman's, "I don't know who he is. You'd better send someone. Yes."

Posted by ncdarquea at 9:53 PM