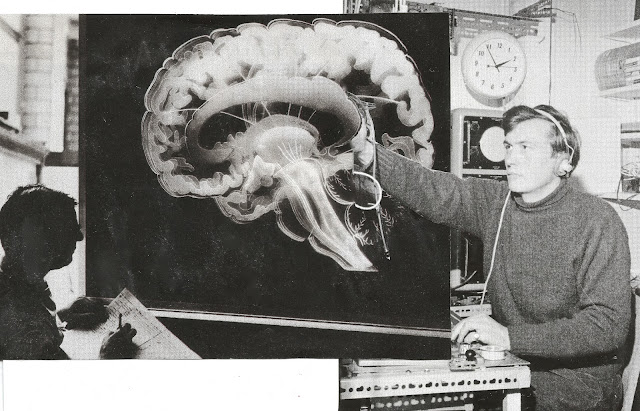 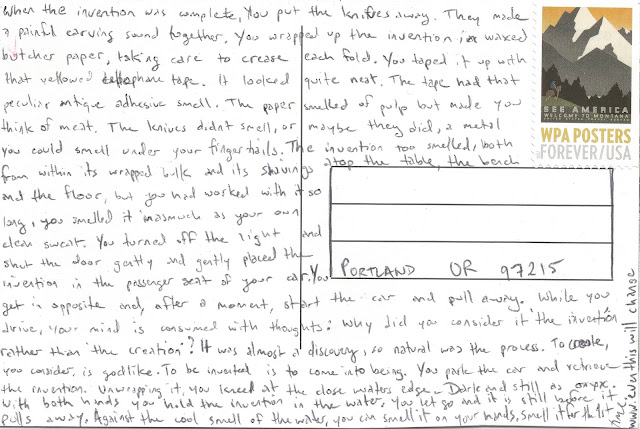 When the invention was complete, you put the knives away. They made a painful carving sound together. You wrapped up the invention in waxed butcher paper, taking care to crease each fold. You taped it up with that yellowed cellophane tape. It looked quite neat. The tape had that peculiar antique adhesive smell. The paper smelled of pulp, but made you think of meat. The knives didn't smell, or maybe they did: a metal you could smell under your fingernails. The invention, too, smelled -- both from within its wrapped bulk, and from its shavings atop the table, the bench and the floor. But you had worked with it so long, you smelled it inasmuch as your own clean sweat. You turned off the light and shut the door gently, and gently placed the invention in the passenger seat of your car. You got in opposite, and after a moment, started the car and pulled away. While you drove, your mind was consumed with thoughts: Why did you consider it 'the invention' rather than 'the creation'? It was almost a discovery, so natural was the process. To create, you considered, is godlike. To be invented is to come into being.

You park the car and retrieve the invention. Unwrapping it, you kneel at the close water's edge, dark and still as onyx. With both hands you hold the invention in the water. You let go and it is still before it pulls away. Against the cool smell of the water, you can smell it on your hands. Smell it for the first time.

Posted by ncdarquea at 6:12 PM