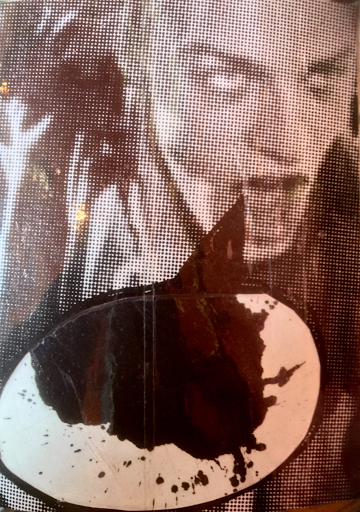 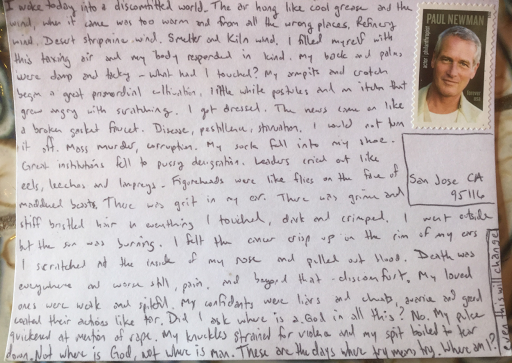 I woke today to a discomfited world. The air hung like coal grease and the wind, when it came, was too warm and from al the wrong places: refinery wind, desert strip-mine wind, smelter and kiln wind. I filled myself with this taxing air and my body responded in kind. My back and palms were damp and tacky - what had I touched? My armpits and crotch began a great primordial cultivation, little white pustules and an itch that grew angry with scratching. I got dressed. The news came on like a broken gasket faucet: disease, pestilence, starvation, (I could not turn it off) mass murder, corruption.... My sock fell into my shoe. Great institutions fell like pussy denigration. Leaders cried out like the squirm of eels, leeches, lampreys. Figureheads were the flies on the face of maddened beasts. There was grit in my ear. There was grime and stiff bristled hair in everything I touched, dark and crimped. I went outside but the sun was burning. I felt the cancer crisp up on the rims of my ears. I scratched the inside of my nose and pulled out blood. Death was everywhere, and worse still, pain, and beyond that, discomfort. My loved ones were weak and spiteful. My confidants were liars and cheats. Avarice and malice coated their actions like tar.
Did I ask, where is God in all this? No.
My pulse quickened at mention of rape. My knuckles strained for violence and my spit boiled to tear down.
Not where is god. Where is man?
These are the days when try means try.
Where am I?
Posted by ncdarquea at 12:12 PM