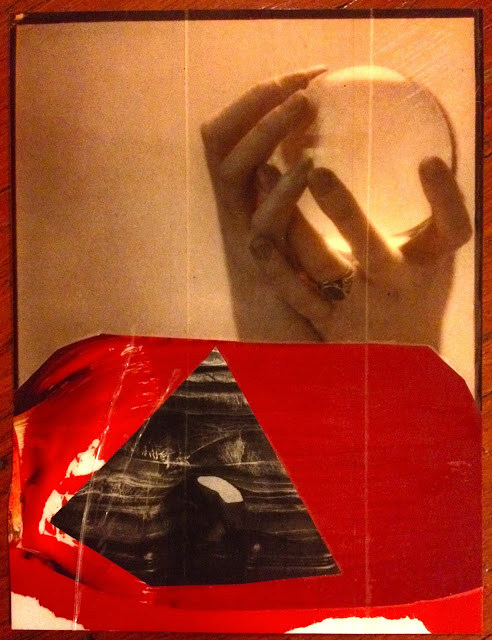 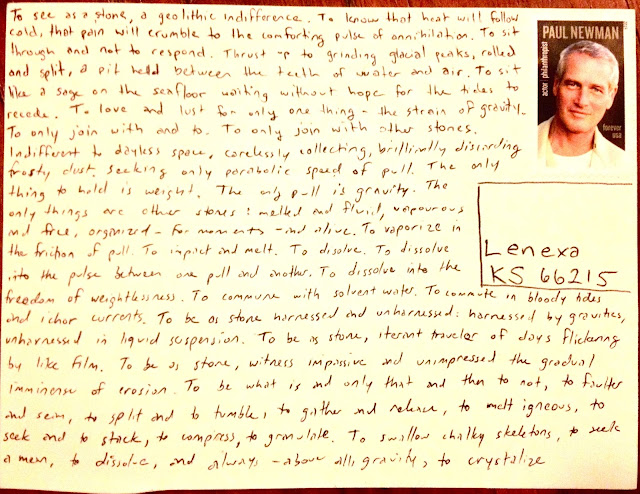 To see as a stone, a geolithic indifference. To know that heat will follow cold, that pain will crumble to the comforting pulse of annihilation. To sit and not to respond. Thrust up to grinding glacial peaks, rolled and split, a pit held between the teeth of water and air. To sit like a sage on the seafloor waiting without hope for the tides to recede. To love and lust for only one thing -- the strain of gravity.To only join with and to. To only join with other stones. Indifferent to dayless space, carelessly collecting, brilliantly discarding frosty dust, seeking only parabolic speed of pull. The only thing to hold is weight. The only pull is gravity. The only things are other stones: melted and fluid, vaporous and free, organized -- for moments -- and alive. To vaporize in the friction of pull. To impact and melt.
To dissolve.
To dissolve in the pulse between one pull and another. To dissolve in the freedom of weightlessness. To commune with solvent water. To commute in bloody tides and ichor currents. To be as stone harnessed and unharnessed. Harnessed by gravity; unharnessed in liquid suspension. To be as stone, itinerant traveler of days flickering by like film. To be as stone, witness impassive and unimpressed the gradual imminence of erosion. To be what is and only that and then to not, to falter and seam, to split and to tumble, to gather and release, to melt igneous, to seek and stack, to compress and granulate. To swallow chalky skeletons, to seek a mean, to dissolve and always -- above all -- gravity, To crystalize.

Posted by ncdarquea at 7:52 PM