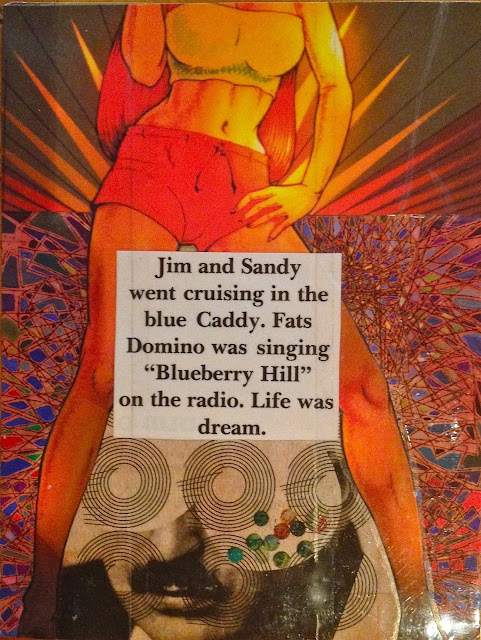 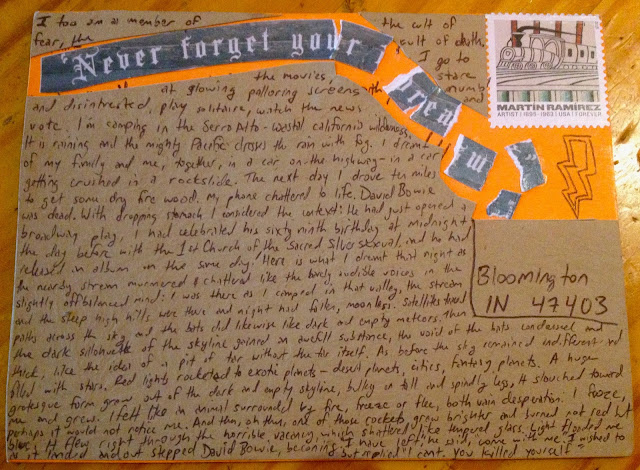 I, too, am a member of the cult of fear, the cult of death. I go to the movies, stare at the glowing palloring screens numb and disinterested, play solitaire, watch the news, vote.

I'm camping in the Serro Alto, a strip of coastal California wilderness. It is raining and the mighty Pacific dresses the rain with fog. The night before, I dreamt of my family and me, together, in a car on the highway -- in a car getting slowly crushed in a rock-slide. The next day, I drove ten miles into town to get some dry fire wood. My phone chattered to life.

David Bowie was dead.
With dropping stomach, I considered the context: he had recently opened a Broadway play, I had celebrated his sixty-ninth birthday at midnight days before with the First Church of the Sacred Silversexual, and he had concurrently released an album I had yet to hear!

Here is what I dreamt that night as the nearby stream muttered like barely audible voices in a slightly off-balanced mind: I was there as I camped in that valley. The stream and the steep high hills were there and night had fallen, moonless. Satellites traced faint paths across the sky and bats did likewise, like dark empty meteors. Then, the void of the bats condensed and thickened. The dark silhouette of the skyline gained an awful substance like the idea of a pit of tar without the tar itself. As before, the sky remained indifferent and filled with stars. Red lights rocketed to exotic planets: desert planets, cities, fantasy planets. I could hear their rumbles. A huge and grotesque form grew out of the dark and empty skyline. Bulky on tall spindly legs, it slouched toward me and grew. I felt like a small animal surrounded by fire. Freeze or flee, both in vain desperation. I froze. Perhaps it would not notice me.
And then, oh then, one of those rockets grew brighter and burned not red, but electric blue. It flew right through the horrible vacancy which shattered like tempered glass. Light flooded me, blinding as the ship landed. The hatch steamed open and out stepped David Bowie, beckoning.
"I have left," he said, "Come with me."
How I yearned to go with him.
"I can't"
"Come," he pleaded with love but without desperation.
." You killed yourself. Its alright, but you killed yourself and I cant go with you."

Posted by ncdarquea at 2:29 PM