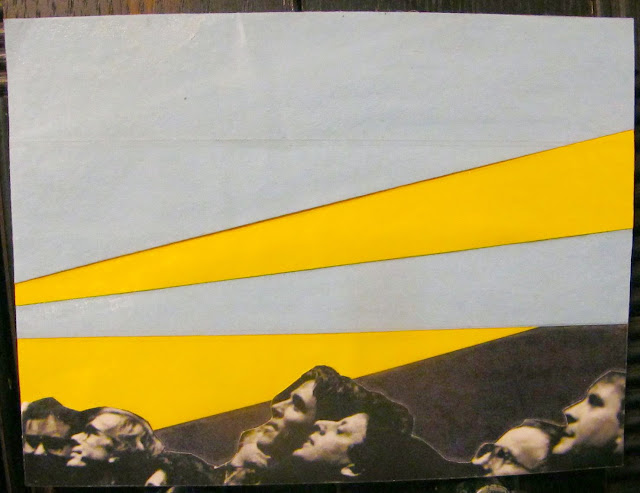 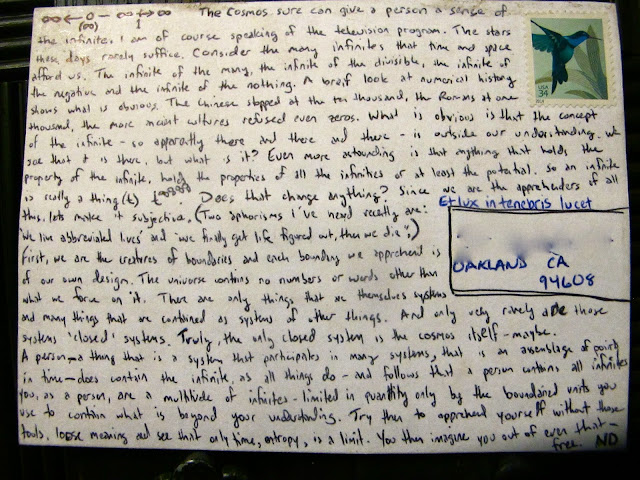 ∞ <  0 - ∞ > ∞
The Cosmos sure can give a person a sense of the infinite. I am of course speaking of the television program. The stars these days rarely suffice. Consider the many infinities that time and space afford us. The infinite of the many, the infinite of the divisible, the infinite of the negative and the infinite of the nothing. A brief look at numerical history shows what is obvious. The Chinese stopped at the ten thousand, the Romans st one thousand, the more ancient cultures refused even zeros. What is obvious is that the concept of the infinite -- so apparent there and there and there -- is outside our understanding. We see that it is there, but what is it? Even more astounding is that anything that holds the property of the infinite, holds the properties of all the infinities or at least the potential. So an infinite is really a thing (t) T∞∞∞∞.
Does that change anything? Since we are the apprehends of all this, lets make it subjective. (two aphorisms I've heard recently are: 'We live abbreviated lives' and 'we finally get life figured out, then we die.') First, we are the creatures of boundaries and each boundary we apprehend is of our own design. The universe contains no numbers or words other than what we force upon it. There are only things that are themselves systems, and many things that are contained as systems of other things. Only very rarely are those systems 'closed' systems. Truly, the only closed system is the cosmos itself -- maybe.
A person, a thing that is a system that participates n many systems, that is an assemblage of points in time, does contain the infinite as all things do -- and follows that a person contains all infinities.
You, as a person, are a multitude of infinities, limited in quantity only by the boundaried units you use to contain what is beyond your understanding. Try then to apprehend yourself without those tools, loose meaning and see that only time, entropy, is a limit. You then imagine yourself out of even that -- free.
Posted by ncdarquea at 10:16 PM