Well, I was the Chappy

And I probably took it too seriously and not seriously enough. Not sure for whom - but that's my impression. I'm totally fine with that self -assessment.
I started by thinking about where I was  going and who would be there - the redwoods with a bunch of UU's. I am not a UU. UU's are interesting folk. It would be difficult to make many generalizations but there are definitely some broad impressions that I wont make here. UU's in the woods. The woods are gentle sentinels of a medium permanency and a solid hint of decay. 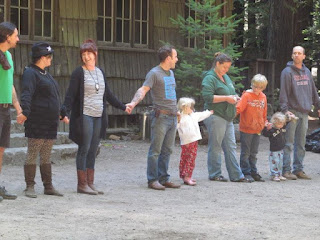 Day 1 - I have to do opening circle? Oh crud I forgot about that! Public speaking, round one, in the round, unprepared. You try it.
Day 2 -Well, work with what's on hand. Take comfort in trees' place of primacy in my personal metaphysicilology. Trees, each growing as it grows in its place and time, each its own potential perfection reached as each is able. As we should aspire.
Day 3 - And then they bend down and die, as we all do. What terror - we walk around on decay and consumption, we squander life on trivialities and avoid death like public speaking. To what end? What will be a reason in three or four generations, or planetary generations, galactic. I bet it doesn't even matter - shiver. The horror is our true place and mystery. What do we do with that? How the hell should I know, but we are not served by ignoring it.
I did a memorial service that day. It was easy to prepare for, as I recalled my grandmother's service from two weeks prior, at which I spoke briefly. I said similar things. I don't mean that flippantly.
That day was emotionally exhausting
Day 4 - Carnival - I take that meaning to heart. Speak on non-sense, as nonsensically as the attendants might tolerate. I would have produced some dada had I the moxy. Revel in the new moon, warm lodge, general feeling of abandon, and what I am going to just refer to here as a mythic. Self made Bull mask is well served and served well.
Day 5 - I missed service. Heard it was good. Dammit, had been laying in bed rewriting the entire thing and time got away from me.
Day 6 - Closing circle. Well prepared with new service from day before. Might have figured something out about Liberal UU and Faith. The word makes them uncomfortable but they have it. Its the response to the solitude of individuality, to the the awe and terror of indifferent nature, to the absurdity of things that is either comedy or tragedy. Faith that our actions matter. We are more than digestors, procreators and consumers. We are actors in a drama that may have no other audience than us, but us is enough and what we do matters and we know what to do. We do the best we can. Sometimes how is muddled but the what is pretty clear. Faith that we can do good and that it matters.

So that was that. I got all my books back - hopefully with some interesting notes.
I heard a podcast today that I thought did a much better job of everything except corporeally being in Mendocino at the appropriate time. I cant figure out how to link it up but its worth a listen. Its a speaker from the Personal Theology lectures held at UUCB (swear I'm not UU) from back in 2010. The speaker is Sam Keen and the title of the lecture was Elemental Sacred Emotions. I agree with every single word he said and would have said them if I could.
Posted by ncdarquea at 11:09 PM